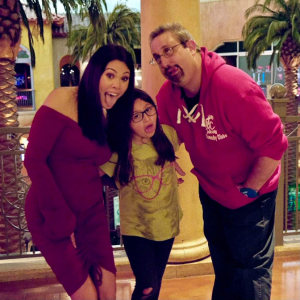 As the calendar flipped to April, some excitement came with it. A feeling of optimism filled the air, but when you are a comedy show ran by comedians you can always expect some serious mood swings. Spring break gave me a great opportunity to bring my 7-year-old daughter Willow down to AC for a week. We had a blast, but one of the highlights of the week was getting to see her do a comedy set at Michelle Tomko‘s open mic. Anyone looking to break into comedy should check out that show on Mondays at 7 pm at the High Point Pub in Absecon. Willow did her rehearsed jokes, but my favorite moment was when she randomly told the crowd that she just also joined a band. One fan asked “what kind of band?” Willow replied, “the kind where you sing and dance.” We were both also pleasantly surprised when a fan of AC Jokes recognized Willow from her appearance on my Podcast “You Got the Light.”

Last Saturday I was promoting the show at the Tropicana when I ran into a group of 5 bachelorettes. Typically, those groups are the hardest to deal with, but surprisingly I was easily able to talk them into coming to our show. As expected, they were terrible crowd members who got super drunk and chatty during the show. To be fair, they pulled themselves together as best as they could and said they loved the show despite maybe listening to half of it at best. I suggested that we all sing Karaoke afterward since Planet Rose has just recently opened back up. They said that they would rather go to the strip club, and I was not going to fight them on that idea. I called up Jose the limo driver, and we were on our way.

We arrived at Stillettos’ where we ran into my friend Gary. Gary told me about his new company “Sky High Munchies.” It’s quite genius. It’s a new delivery service that brings you snacks, and as a “gift” they include weed. Under the new laws, this is totally legit and he told me how he had already appeared on 101.5 FM radio to talk about it. I got so into talking about Sky High Munchies that I barely noticed the bachelorettes leaving, but they all followed me on Instagram so I’ll chalk it up as a minor victory. More importantly, the next day I contacted our friends and the Scotty and JoJo radio show on 100.7 FM to tell them about Sky High Munchies. They loved it and booked Gary as a guest on their show. We also had to cut sales off for the Roast of Scotty on April 29th because tickets went so fast.

Last Friday we tried an experiment and brought in an up-and-coming comic named Nicky Smigs. Nicky is from Chicago and has gained a strong following on social media by doing hilarious impressions. His following has grown so fast that Carmines Restaurant was kind enough to offer us a free meal in exchange for Nicky shouting them out as the place to be in AC. Myself, Nicky, and Mike Merk were going to be the guests, but when Petey Rancel saw us about to chow down he literally jumped through the window to join us. This move turned out to be especially a good play by Petey since he wound up also taking the leftovers home to his wife. Special thanks to Whitney Ullman for the Carmines hookup.

Tuesday night I was excited to get away from AC for a change, to do a show with the hilarious Eleanor Kerrigan. Eleanor opens for Andrew Dice Clay, and I just needed a break from everyone. The show was at the Laughing Fox in Magnolia NJ. Steve Rinaldi and I run a show there every Tuesday Night. The show was so much fun! Then as the show was wrapping up, Zach Pickett and Mike Merk walked in and said they needed to get away from AC for a night also. I guess sometimes there is just no escaping this weird dysfunctional comedy family that we have, but I was happy to see them.

Later in the week, Zach gave a powerful performance that was both hilarious and emotional. Toward the end of the show, he was making some great points about the power that comedy has to connect us all. Some drunk guy yelled out that “he paid to see comedy.” Zach got a huge laugh and applause as he apologized and told a knock-knock joke. The point is that if you come to an AC Jokes Show you can expect tons of laughs, but be ready to also open your mind and think a little. As Zach put it, “comedy shows are one of the few places left where you can go and hear the truth.”

It’s hard, to sum up, the week in one short article because so many amazing things happen that it becomes a blur. Some other highlights of recent include: tossing out four drunk guys who turned out to be cops, me getting spanked with my belt by a dominatrix, Merk and I crushing it at Karaoke with our rendition of Shakira’s “My Hips Don’t Lie,” and the powers that be telling us that we would need to cut our capacity back to where we can now only seat about 50 people. You never know what will happen next, but in the meantime we are trying to enjoy the ride and make people laugh.

Matt Bridgestone has been performing and producing comedy shows for almost 20 years. He began producing shows in Atlantic City 5 years ago. At a time when many people were turning away from Atlantic City, Matt decided to go “all in” and bring showcase style comedy back to Atlantic City. Matt organized a team of talented comics and producers which would eventually grow into ACJOKES.COM. He has done shows with comics such as Jim Breuer, Dane Cook, Artie Lange, Mick Foley, Nick Cannon, and many more. His favorite moment of his career was when he got to meet one of his heroes, George Carlin. Matt’s style is a combination of intelligent observations and sophomoric silliness. His shows have a genuine quality that leave you feeling like you just got to hang out with an old friend.