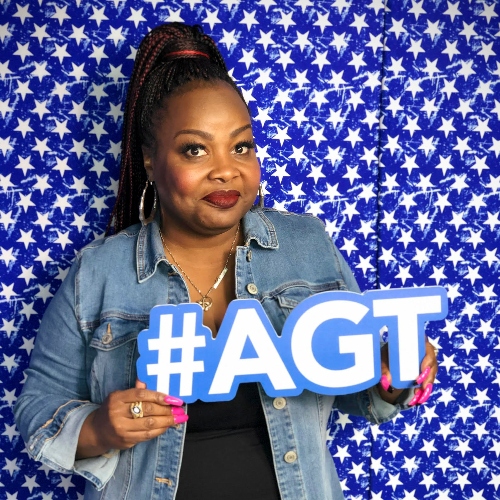 Comedian Jackie Fabulous captured America’s heart as a semi-finalist on the 2019 season of America’s Got Talent. She’s got charms that can make even Simon Cowell blush, as she was the only contestant Simon walked on stage to hug! Jackie Fabulous is a hilarious and affable stand-up comedian, writer, actor, producer, motivational speaker, and headliner who uses her jokes and sparkling nature to simultaneously entertain, encourage, and empower audiences while keeping them laughing, and easily navigating the comedy gamut from family friendly to naughty. She is so comedically versatile, she could work a bar mitzvah, a bachelorette party, or your uncle’s funeral.

Jackie’s standup has been featured on the Arsenio Hall show, Gotham Comedy Live, FOX, BET, Last Comic Standing, Kevin Harts LOL Network and more. And you may have seen her memorable talking head and hosting moments on the CW, and NBC’s “I Do.” In addition to her television appearances, Jackie Fabulous is a paid regular and headliner at most of the top comedy clubs in the country, including The Comedy Cellar, The Hollywood Improv, The Laugh Factory, The Comedy and Magic Club, and the House of Comedy and Funny Bone clubs.

Jim Mendrinos
Scroll to top
OUR TROPICANA LOCATION IS OPEN!!!