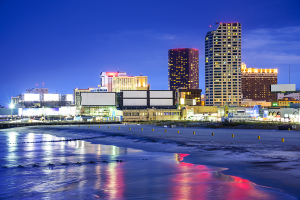 Great comedy often comes from a place of pain. Name a celebrated comic; he or she probably picked a bunch of past scars to get a laugh. The late Robin Williams once said, “Comedy can be a cathartic way to deal with personal trauma.” Carol Burnett has a famous quote that goes, “Comedy is tragedy plus time.”

And then, there’s Mel Brooks: “Tragedy is when I cut my finger. Comedy is when you fall into an open sewer and die.”

If you’ve ever taken a fat loss on a trip to the casinos in Atlantic City, NJ, you know it can feel like cutting your finger and falling into an open sewer, and maybe not dying, but definitely needing some catharsis — quick.

We’re not saying that’s why we chose the Kiss Kiss Nightclub at Tropicana Atlantic City, and Anchor Rock Club for our AC Jokes Comedy Club locations. Not all trips to the gambling capital of New Jersey end in tragedy. However, comedy shows are a perfect way to up the ante on a great time.

But, you can’t deny, there’s no better place to forget your troubles — or, to laugh at someone else’s pain while easing your own — than a comedy club.

Our two comedy club locations are the best bet you’ll make on your next trip to AC NJ.

For more information about any of our great Comedy Club locations or to book tickets to a comedy show for your next visit to New Jersey, call 609-800-8493 or e-mail info@acjokes.com.